2 The History of Remote Sensing

Remote sensing began in the 1840s as balloonists took pictures of the ground using the newly invented photo-camera. Perhaps the most novel platform at the end of the last century is the famed pigeon fleet that operated as a novelty in Europe. 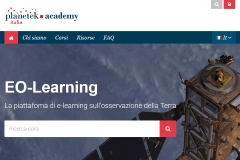 Don't miss our new online course platform.
It's free, updated and you can track your progress!
Visit now: https://eolearning.planetek.it/

Aerial photography became a valuable reconnaissance tool during the First World War and came fully into its own during the Second WW. The logical entry of remote sensors into space began with the inclusion of automated photo-camera systems on the captured German V-2 rockets launched out of White Sands, NM. With the advent of Sputnik in 1957, the possibility of putting film cameras on orbiting spacecraft was realized. The first cosmonauts and astronauts carried cameras to document selected regions and targets of opportunity as they circumnavigated the globe. Sensors tuned to obtaining black and white TV-like images of the Earth were mounted on meteorological satellites that began to fly in the 1960s. Other sensors on those satellites could make soundings or measurements of atmospheric properties over a range of heights.

As an operational system for collecting information about the Earth on a repetitive schedule remote sensing matured in the 1970s when instruments were flown on Skylab (and later, the Space Shuttle) and on Landsat, the first satellite dedicated specifically to monitoring land and ocean surfaces to map natural and cultural resources. A radar imaging system was the main sensor on Seasat and, going into the 1980s, a variety of specialized sensors – CZCS, HCMM, and AVHRR among others – were placed in orbit primarily as research or feasibility programs.
The first non-military radar system was JPL’s Shuttle Imaging Radar (SIR-A) on the Space Shuttle in 1982. Other nations soon followed with remote sensors that provided similar or distinctly different capabilities. By the 1980s, Landsat had been privatized and a widespread commercial utilization of remote sensing had taken root in the U.S., France, Russia, Japan and other nations.
To whet your appetite for more, we will now show you one of the typical early Landsat images that started the “bandwagon” of interest in use of satellites to monitor the Earth’s surface. The scene below is a Landsat 1 view of north-central Utah taken just 15 days after launch (August 7, 1972).
The right side of the image is a bright red – the normal color for thick forests and grasslands as rendered in a false color image in which red is associated with healthy vegetation that is very bright in the near-infrared (see the next sections for the explanation of color response and assignment). The red areas on the right coincide with the high Wasatch Mountains that run east of the block-fault mountains and deserts (gray-tan tones) of western Utah. 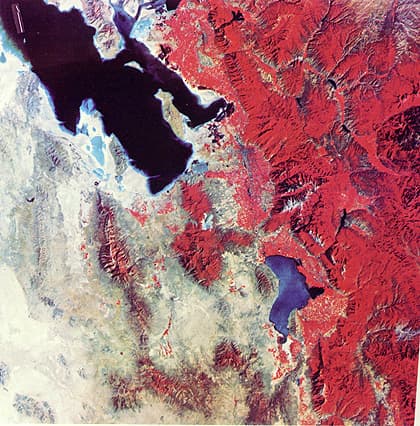 Other reds in small patches mark the farmlands of the desert plains. The Great Salt Lake occupies part of the upper scene (if you look carefully, you may see a slight tonal difference along a straight, sharp boundary; this is due to a cutoff of water circulation by the Union Pacific railroad causeway). Lake Utah (bluer because of silt) is to its south. The metropolitan area of Salt Lake City can be discerned in this image (we will challenge you to find it). This image, of course, is a vertical view.

To acquaint you with looking at the Earth this way, we are adding a near-horizontal aerial view of the City and the Wasatch Front to its east – try to relate this oblique perspective with its appearance from Landsat. 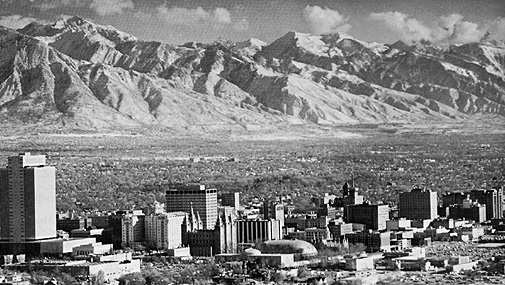 Some space systems designed for remote sensing use as land, ocean, and weather observers will be introduced and exemplified in the course. We will list here the principal ones flown by several nations (identified in parenthesis) along with the date the first (and sometimes only) of each was launched.

This impressive list is convincing: Remote sensing has become a major technological and scientific tool used to monitor planetary surfaces and atmospheres. In fact, from a dollar-based measuring stick, the expenditures on observing Earth and other planets has since the earliest days of the space program now exceeded $150 billion. Much of this money has been directed towards practical applications, largely focused on environmental and natural resource management.
The Table below elaborates on this by summarizing principal uses in 6 disciplines.

The literature on remote sensing theory, instrumentation, and applications is now vast – including a number of journals and reports of numerous conferences and meetings. The great improvements in computer-based processing, especially now the ability of personal computers to handle large amounts of remote sensing data, have made satellite and manned platform observations accessible to universities, resources-responsible agencies, small environmental companies, and even individuals. The concurrent development and rise of Geographic Information Systems (GIS) into widespread availability and use has provided an exceptional means for integrating timely remote sensing data with other spatial types of data. The GIS approach is well suited to storage, integration, and analysis, leading to information that has a practical value in many fields concerned with decision-making in resources management and environmental control.

The need to develop monitoring systems that can map changing land use, search for and protect natural resources, and track interactions among the biosphere, atmosphere, hydrosphere, and geosphere has become a paramount concern to managers, politicians, and the general citizenry in both developed and developing nations.

Don't miss our new online course platform.
It's free, updated and you can track your progress!
Visit now: https://eolearning.planetek.it/

Remote sensing
Collection and interpretation of information about an object without being in physical contact with the object.

Radar
Acronym for radio detection and ranging. Radar is an active form of remote sensing that operates in the microwave and radio wavelength regions.

Sensor
Device that receives electromagnetic radiation and converts it into a signal that can be recorded and displayed as either numerical data or an image.

Scene
Area on the ground that is covered by an image or photograph.

HCMM
Heat Capacity Mapping Mission, the NASA satellite launched in 1978 to observe thermal properties of rocks and soils. It remained in orbit for only a few months.

Image
Pictorial representation of a scene recorded by a remote sensing system. Although image is eral term, it is commonly restricted to representations acquired by non-photographic methods.