The first images from the Italian Space Agency satellite were presented in Le Bourget, Paris, 18 June 2019. Captured by the hyperspectral sensor, they have been received in Matera and processed by a team of engineers and scientists. This “first look” confirms the outstanding performance of PRISMA and its hyperspectral sensor.

Water quality, crops monitoring, drought and wildfire risk, air pollution: the Italian Space Agency released the first images from the PRISMA satellite, which reveal the state of our planet’s health and contributes to the United Nations Sustainable Development Goals. Thanks to its hyperspectral sensor, developed by Leonardo and the first of its kind ever launched in Europe, PRISMA proves to be a versatile guard to protect the environment.

The amazing pictures were captured in Italy, Peru and Iraq during the Commissioning of the system. This phase, managed by the Space Centre in Fucino, Italy, involves in-orbit satellite and instrumentation testing, until the satellite is fully operational and its data available to the scientific community. The images were received by Matera Space Centre, where a team of experts from ASI, Leonardo, Planetek, Telespazio/e-GEOS and OHB Italia processed them with the support of scientists from the National Research Council of Italy (IREA/CNR) and the University of Milano-Bicocca.

Launched on the 22nd March 2019, PRISMA, a satellite of ASI developed by an industrial consortium led by OHB Italia and Leonardo, is the first European Earth Observation system with innovative hyperspectral optical instrumentation able to perform chemical and physical analysis from Space. The first data from the mission confirms the ability of the Italian space system, which developed advanced expertise for future hyperspectral missions in Europe and the rest of the world. 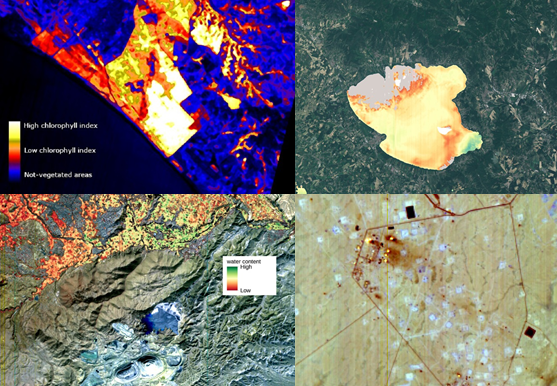 The first PRISMA image features Trasimeno, the fourth largest Italian lake, with a surface of 128 square Km (see the up right image). The water resource is key for tourism, agriculture and fisheries. In less than 2 seconds, PRISMA measured the turbidity of every single spot in the lake, identifying the clearest waters and algae colonies. Water is the most precious resource we have on our Planet and its wise management – in line with SDGs "clean water" and "life below water” – is, in this era signed by climate change, a commitment to future generations.

In the second image (see the down left image), PRISMA detected vegetation water content in Perù, recognizing well-irrigated fields and droughts. Sustainable agriculture is a major challenge for mankind: aiming at "zero hunger" and "sustainable production and consumption" United Nations SDGs, PRISMA allows unprecedented accuracy monitoring water scarcity in crops, offering new instruments to precision agriculture and resource management.
Every year about 65,000 fires occur in Europe with 85% of them in the Mediterranean area. Water monitoring, when applied to forests, can provide a precursor signs of wildfire risk. The third image shows an example where state of the art technology can be effectively used to save human and animal lives, to protect biodiversity and preserve soil against hydro-geological risks due to fires.

In Castel Fusano (Italy) (see the up left image), a naturalistic area put at risk by frequent fires, PRISMA performed two analyses: the vegetation status, with an evaluation of chlorophyll, and the water content in forest areas, identifying drier areas with higher fires risk.

Gas flaring from oil production in Bassora/Basra (Iraq) has been captured by PRISMA as well (see the down right image). In addition to precisely determining the fire extent, hyperspectral technology allows the recognition of the chemical substances generated by combustion: CO2 and other hydrocarbons have a “hyperspectral fingerprint – PRISMA measures air pollution and characterizes it.

PRISMA is able to monitor the delicate terrestrial ecosystem: it recognizes not only water and soil conditions worldwide, but also atmosphere status and the chemical substances in it, which is extremely valuable for evaluating natural disasters. The amazing pictures released today are just a small sample of what to expect when the system is fully operational: a crucial contribution to the controlling pollution, studying climatic and environment changes, and unprecedented support to resource and emergency management.